From Managing Decline to Building the Future

What would it look like for there to be a visa program that matched skilled immigrants with communities that are especially hard-hit by population decline in the U.S.? The Economic Innovation Group, a think tank founded by Sean Parker of Facebook fame, just published a report outlining this idea. I think the idea is compelling, but there are a few questions that come to mind:

How to redesign GDP for the 21st century

Lots of countries, particularly developing ones, hang their hat on the size of their GDP (gross domestic product) which measures the value of the things we pay for in a year. A lot has changed since the measure was developed in the 1930s and the measure doesn’t quite capture all the value being created in an economy.

If this catches on, I’m really interested to see the impact it could have on policymaking. For example, Ghana rebased its GDP last year using a new set of more recent data that included more factors in its economy like oil and technology. On paper, the country’s GDP was $52 billion, about 25% bigger than originally believed. A number of governments in Africa turn off the internet around election time to stave off protests and organizing while they conduct funny business. Imagine getting a better measure of that impact. These past couple years in the U.S., I’ve often wondered what has been the impact on productivity of this president tweeting so much. Perhaps GDP-B could provide an answer.

Forbes puts this list out on the top 100 venture capitalists based on the the following methodology:

To make the list, investors are ranked by their portfolio companies that have gone public or been acquired for at least $200 million over the past five years, or that have raised additional funding at a valuation of $400 million or more. Forbes and TrueBridge put a premium on newer exits, as well as early-stage returns.

Author Calls For African Entrepreneurs to Talk About Failure

The IMF highlighted concern about African economies operating at two speeds, with some countries driving high growth levels and others serving as a drag on growth. The debt situation of countries like Mozambique is also concerning. These countries which raised a bunch of money on bond issuances several years ago are now struggling to handle them. It would be frustrating to see a bunch of defaults like Mozambique in the coming years.

After shutting off the internet in the English speaking portion of Cameroon for 94 days, the government is hosting a conference on the digital economy promoting it’s efforts to be a global leader in that space. Seriously? Let’s work on not shutting of people’s internet connections, first. 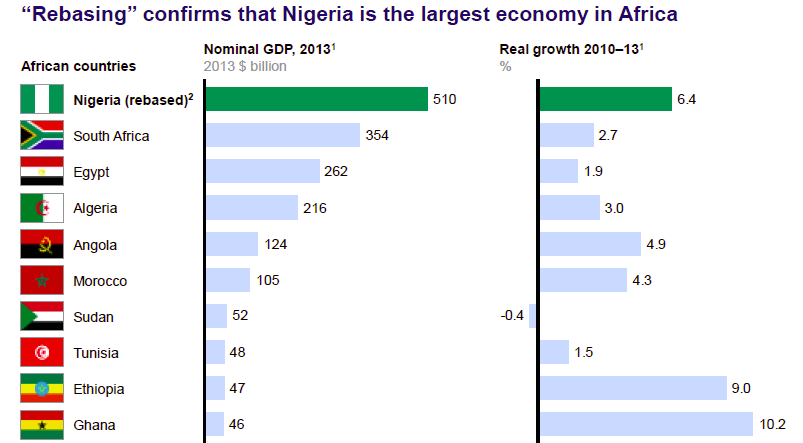 Last weekend, some friends and I hopped on a Google Hangout to discuss McKinsey Global Institute’s report on Nigeria’s inclusive growth prospects and what needs to happen for the country to realize that potential.

Here is a quick rundown of some numbers:
40 million Nigerians are in the consuming class, but 130 million live below the Empowerment Line – an indication of their ability to afford eight household essentials for a decent standard of living.
GDP could reach $1.6 trillion by 2030. Investment in infrastructure could reach $1.5 trillion to support GDP growth and address road density being 1/7th and power generation 1/5th that of India.
Three things that stood out from the conversation:
1. Nigeria is growing in spite of the serious challenges it faces. We have seen the coverage of Boko Haram’s activity in the North and the 130+ days the government has still not rescued the girls kidnapped from their school. We have also seen the largest acquisition by a Nigerian company when Oando bought ConocoPhillips’ Nigeria oil assets for $1.65B. Nassim Talib’s theory of antifragility comes to mind – the notion of shocks, disorder, volatility driving gains.
2. The skills gap in the country was troubling. The report states that 1 out of 6 of the world’s out of school children between age 6 and 17 are in Nigeria – 10.5 million children. Just thinking about the world’s population, I would think there are more than 60 million children not in school within this age range. Nonetheless, think about all the latent potential in Nigeria. Furthermore, the report highlights the poor quality of education. After six years of school, one out of five Nigerians between the ages of 15 and 29 can read and write.
3. Urbanization in the country was another interesting part of the conversation. McKinsey’s insights on urbanization not having the same economic effects as in traditional models was quite interesting. We discussed the rise of financing tools to get more people into homes and the potential risk of tools like mortgage-backed securities.
Nigeria’s growth potential is real, as are its risks. The report had a lot of information and I am interested in your insights. What are some other things that stood out for you in the McKinsey Global Institute report? Shoot me a tweet with your thoughts.

When I first saw, the agenda for the Africa Rising seminar at this year’s IMF/World Bank Spring Meetings, I posted a tweet:

There's a peculiarity in the agenda for IMF/World Bank Spring Meeting seminar on "Africa Rising." What is it? http://t.co/wiuvyow1We

Probably not the wisest thing to not provide any context. So, here goes.

My issue with the seminar is the makeup of the panels. I believe there could be a greater representation of African academics and practitioners. Currently, 30 percent of the panelists are African nationals. Considering that the topic is Africa, this strikes me as odd.

Consider the following promotion of the Africa Rising Conference slated to take place in Mozambique next month.

The Government of Mozambique and the IMF will convene a high-level conference in 2014 to take stock of Africa’s strong economic performance, its increased resilience to shocks, and the key ongoing economic policy challenges. The Africa Rising conference will be held May 29-30, 2014, in Maputo. The event is intended to follow up on the 2009 Tanzania Conference, which helped galvanize international support for Africa after the 2008 financial crisis. The conference will bring together policymakers from Africa and beyond, the private sector, civil society, academics, and private foundations with the goal of sustaining the current growth and sharing its benefits among African populations.

I find the statement in bold odd considering the relative struggles much of the rest of the international community faced after the financial crisis. Furthermore, the statement defaults to Africa somehow being dependent on externally driven development. I think the structure of this week’s Africa Rising seminar could potentially do the same.

Afara Global exists to see a world in which African and Western countries engage economically at an eye-to-eye level. To do that, you need the right people at the table. While the majority of the panelists are quite impressive, I think the right people are not all present – at least not in this seminar.

A few candidates come to mind for future reference:

Rolake Akinkugbe is Head of Energy, Oil and Gas Research at Ecobank.

Alexander Chikwanda serves as Zambia’s minister of finance. As Africa’s biggest producer of copper, the country has had to deal with global copper prices while driving inclusive growth at home.

Yaw Nyarko is Professor of Economics at New York University and is Director of the university’s Africa House and focuses his research on technology and economic development, and has done work on human capital.

Dambisa Moyo is CEO of the Mildstorm Group and has a global view on economics and development from an African perspective.

Akinwumi Adesina is Nigeria’s Minister of Agriculture and has earned a lot of attention for his efforts to grow Nigeria’s agriculture sector. He could speak to inclusive growth and structural transformation and economic diversification.

Who are some people you think would make for good panelists?