The African Growth and Opportunity Act is up for re-authorization on September 30, 2015. The Act essentially makes it easier for certain African countries to export some of their goods to the United States, by making them duty-free. The goal of the Act was to support development on the continent and increase US-Africa trade. Fifteen years later, the program has fostered some development in participating countries, though the deepening of US-Africa trade is debatable.

It will be interesting to see AGOA data for all of 2014, once it comes out later this year. The Q1 2014 data showed a 34 percent drop in US imports of Sub-Saharan African countries. That brought US imports from Sub-Saharan Africa to 1.2 percent of its imports from the world – $6.7 billion. It doesn’t help that crude oil has taken the major share of AGOA usage over the years, and the US has drastically increased domestic oil production. This year Nigeria stopped selling oil to the US last year. Hopefully, US imports from the region have not dropped below 1 percent. 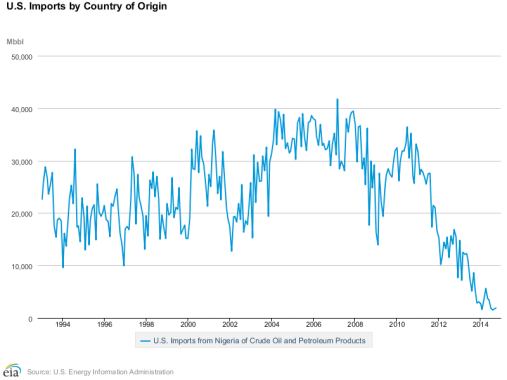 Perhaps the rise of Africa’s fashion industry will show up in the 2014 data. Congress included apparel preferences in the Act in hopes that African countries would be able to replicate the success Southeast Asian countries have had using the apparel industry to develop their economies.

One thing that stands out about US-Africa trade is that the US does not have a two-way trade agreement with an African country. The last time this came up was with South Africa in the mid 2000s, but those talks fell through. Unless Ambassador Froman got some inspiration from the US’ secret talks with Cuba, I don’t imagine we will be seeing any free trade agreements or the like come up in the next year or so. If those sort of talks kicked off again, I imagine the US would approach South Africa first. That could be an interesting conversation, considering South Africa’s BRICS status and role with the development of the BRICS bank, though I’m not sure what relevance that would have to any potential trade negotiations. Would Russia try to insert itself in those negotiations? Let me put the reigns on my imagination.

Another issue is the low usage of AGOA. Apparently, half of the participating countries exported less that $1 million worth of goods. I don’t know if that is a capacity issue, or what, but it would be good to see more of the participating countries not leave money on the table here. Like Rosa Whitaker’s tax credit idea, I will keep an eye on this, talk to folks who know a lot more about the Act than I do, and put together a more organized piece on this.

This site uses Akismet to reduce spam. Learn how your comment data is processed.